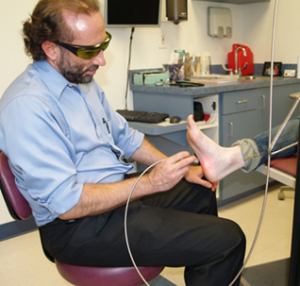 I have had an Avicenna Laser in my office since April, 2008. This Class IV high power laser can be used to treat a large variety of pain conditions such as sprains, strains, bursitis, tendonitis, and neuropathy. It can also be used to help promote healing of bones, wounds, and post-operative tissue. Please read more at www.avicennalaser.com ,which links you to the website for the company that succeeded Avicenna Laser.

You do NOT have to be a member of my medical practice to see me for laser therapy.

Karen H., Carlsbad: I had surgery to remove a Morton’s neuroma on my left foot. The orthopedic surgeon said that I would wear a boot for the first four weeks, with an expected total healing time of eight weeks. 4 days later I started Avicenna Laser treatment with Dr. Marty Schulman. Prior to that time, I was unable to step down, even while wearing the boot, without significant pain. After the first treatment, I was able to step down on the foot (wearing the boot) with minimal pain. I was treated by Dr. Schulman for the next five consecutive days. With each treatment, he increased the power, beginning at 1.5 and ending at 4.0. Immediately following the fourth treatment and each subsequent one, any pain associated with the foot and incision abated, and a sense of relaxation and “euphoria” remained in the foot for four-five hours. When I met with the orthopedic surgeon three weeks after the surgery, he was extremely pleased to see that there was no swelling and that the healing process was ahead of schedule. He suggested that I could begin easing back into a shoe a full week earlier than he had originally recommended. It has now been four and half weeks, and I am able to walk in a shoe for the entire day with minimal to no pain.

Dana G., Carlsbad: Dr. Marty Schulman’s Avicenna High Power Laser Therapy is my miracle! I had been suffering with tennis elbow for over 6 months and no treatment was able to relieve the pain and keep it away like his laser therapy did. I had tried everything from OTC pain relievers to cortisone injections to acupuncture, all without lasting relief. From the second session with the laser I had complete relief from all pain associated with moving my wrist! Subsequent treatments worked on my residual elbow pain and after a total of 12 treatments my pain is 99% improved and I now often forget that my elbow was ever a problem. Everyday movements like putting on my seatbelt, answering the telephone, and lifting things no longer cause pain, and I have been able to lift weights at the gym for the first time in over 6 months with no pain whatsoever. I feel like I have a new elbow thanks to Dr. Schulman.

Linda A., Carlsbad: Dr. Marty Schulman suggested high power laser treatment for pain management of bursitis in my hip. 3 weeks prior I had a cortisone injection which did give me some relief, but after 3 weeks the pain was back. It was hard to move around when I first got up in the morning, and exercising only aggravated the pain. There was immediate relief after the second laser treatment and with each subsequent treatment the pain subsided even more. We were able to stop after 6 treatments. I no longer feel pain when I get up in the morning and it feels great to exercise again. The treatments were quick and painless, and thanks to Dr. Schulman I don’t need another cortisone injection. I would highly recommend this treatment for acute or chronic pain. The results were amazing!

Van I., Carlsbad: For nearly two years I had been living with chronic pain as the result of a compressed ilioinguinal nerve. Fed up with living on ibuprofen and heating pads, I went to see Dr. Marty Schulman. He told me that my options were nerve block injections, surgery, or a new high powered laser treatment. Surgery and injections didn’t sound like any fun to me, so I opted to try the laser. I have to admit that I was very skeptical at first. However, I began to experience immediate relief after the first treatment. After five quick and painless sessions (it feels like a jet of warm water), I am happy to say I no longer have the type of pain I was experiencing! Needless to say, I highly recommend trying this procedure.

Al M., San Marcos: Dr. Schulman, I wanted to let you know that since the laser treatments that you did on my hip 2 months ago I am off the pain medication, I walk, play golf, carry on the usual daily activities and now function and sleep without the hip joint pain that I had been experiencing for so many years. If anything changes I’ll let you know but I am very excited about the results of your treatment and have shared the results with others.

Al M., San Marcos (3 months later): Dr. Schulman, I wanted to give you an update on the recent laser treatment. I was taking prescription pain medication so I could walk, get in and out of my car, etc. without debilitating pain. I received almost immediate relief from your treatment and here I am five months later still pain free. The real test in my view was when I returned to the gym half way expecting some pain to return. I now work out four to five days per week and still no pain. All I can say is “thanks.”

Ilene O., Cardiff by the Sea: I highly recommend Avicenna Laser therapy by Dr. Marty Schulman. I had been experiencing patellofemoral pain and discomfort for quite a few months and had tried various treatments including ibuprofen, ice, and heat but with no relief. When the pain began to impact my daily routines and I needed to stop walking the hills in my neighborhood I knew that I really needed to deal with this. Laser therapy made sense to me, and after a few treatments my knee started feeling better. I was amazed that I was able to return to my regular routines of exercise and riding my horse. I can say that I am virtually pain-free now.

Sylvia G., personal trainer, Encinitas: I would like to sincerely thank you for introducing laser therapy to me. After several months of frustrating pain in both my hip and my foot I had reached my limit. I had already gone through some physical therapy and had been convinced by a podiatrist that surgery was the only alternative for my foot. I was greatly opposed to this treatment since it would mean that I would be off my training regimen for at least 12 weeks. This was not acceptable to me. This is when a client of mine, Dana G., mentioned that she had a treatment that had cured her tennis elbow pain.

I must admit I was apprehensive and skeptical but was pleasantly surprised when only after 3 treatments the pain in my hip had significantly been reduced and after 4 treatments I was able to go back to running my long distance runs. The bunion on my foot not only stopped growing but reduced in size and even after 6 months is still not a factor in any of my runs and is no longer considered to be of surgical necessity. I am now a strong advocate of laser therapy. I have referred many of my personal training clients with chronic pain due to overuse and/or sport injuries.

On a personal level I must say that you quickly showed me your sincere care and concern from our first meeting. Your knowledge and willingness to share and look up specifics to show me in medical journals was impressive. Thank you for your genuine concern and professionalism.

In October 2005 I transitioned from an academic medical practice with the UC San Diego Medical Group, where I was a faculty clinician for previous 15 years, to a solo private practice in Family Medicine in the beautiful north coastal San Diego County town of Encinitas, which I have called home since 1988.

Font Resize
Accessibility by WAH
Call Us Text Us